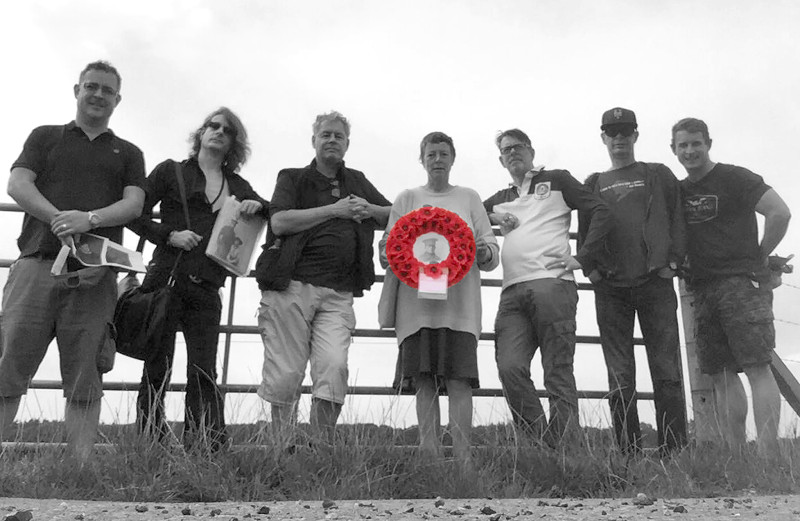 Above: The evidence suggests Reggie died somewhere in the area shaded in the centre of the above map, between Clapham Junction, Glencorse Wood to the North, and Inverness Copse to the South.

Above Left: The place Reggie was killed is evidently near Clapham Junction, in the bottom left corner of this 2017 Google Earth oblique view.

Above Right : This aerial photograph taken 19 August 1917 shows the same view. The trench on the left is Jap Avenue, from where Reggie's battalion was attempting to take Inverness Copse when he was killed. 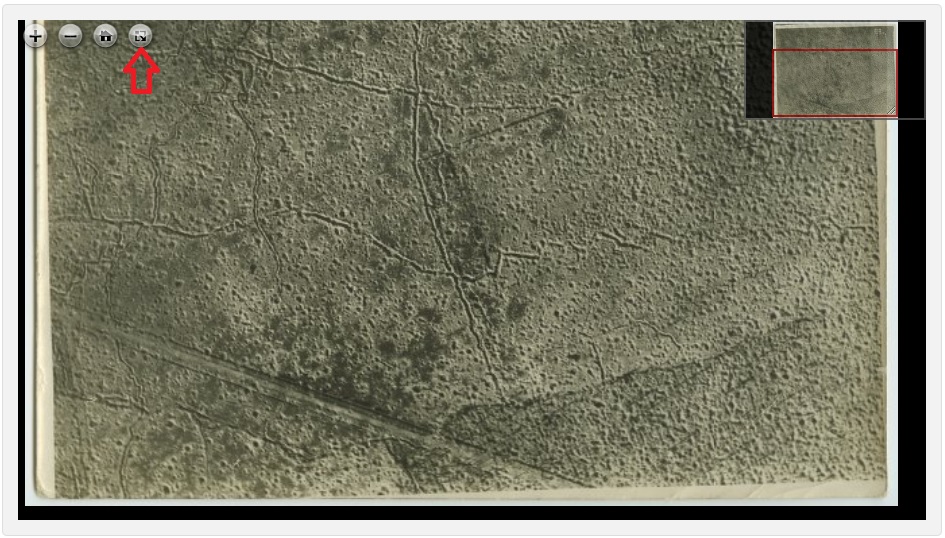 Above: Click image above to open very highly detailed aerial photo on McMaster University website. Then click on the icon indicated above for full screen mode. Mouse roll to Zoom

Photos from the battlefield in 2017. See the map below showing from where they were taken.

Above: Reggie was killed near this spot. Inverness Copse on the right in the distance (from where enemy strong point was laying down machine gun fire)  (Photo 1)

We retraced Reggie's final steps, carrying with us the wreath that we would lay at Menin Gate later that day. 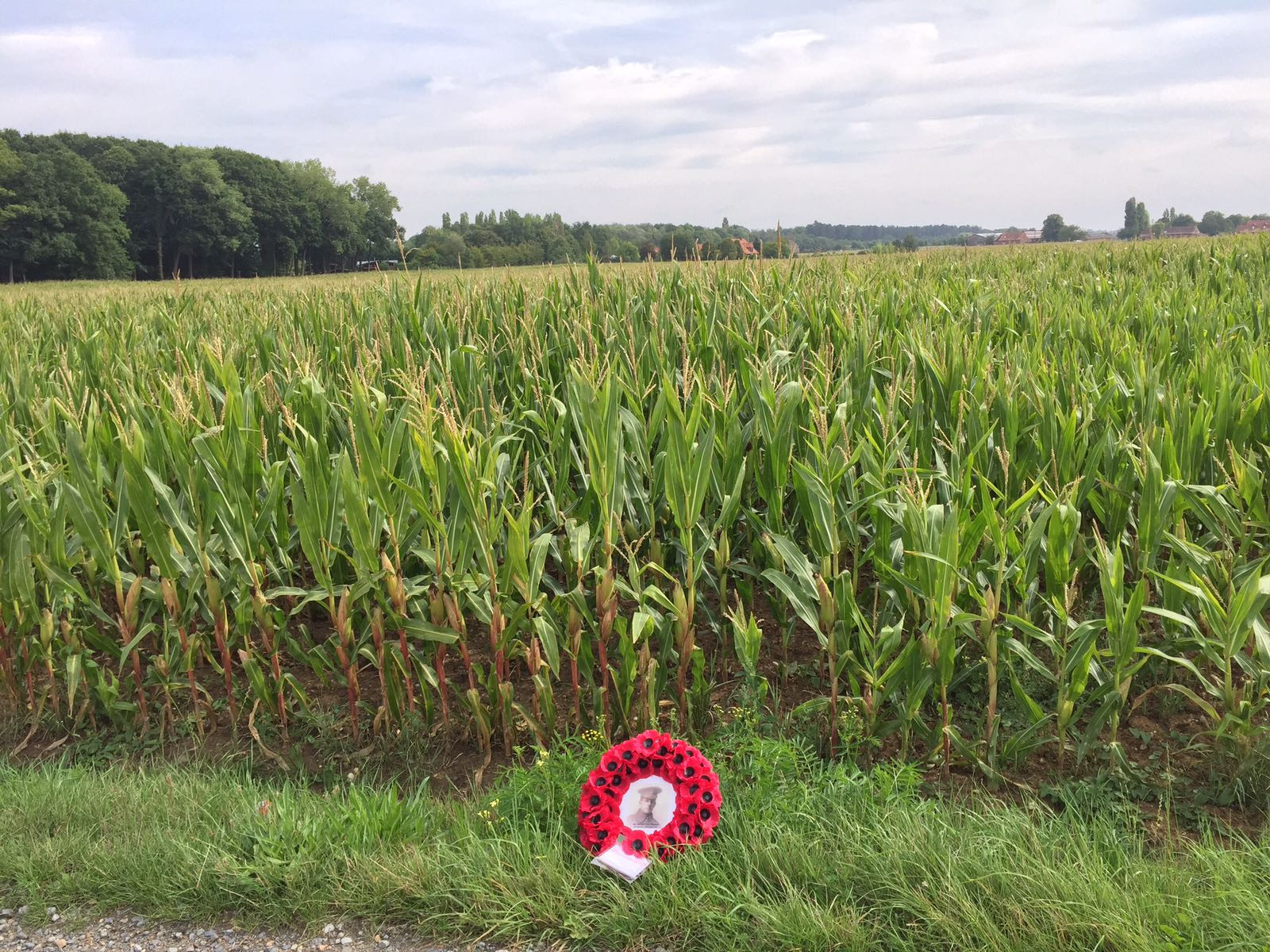 Above: Glencorse Wood on the left. (Photo 2) 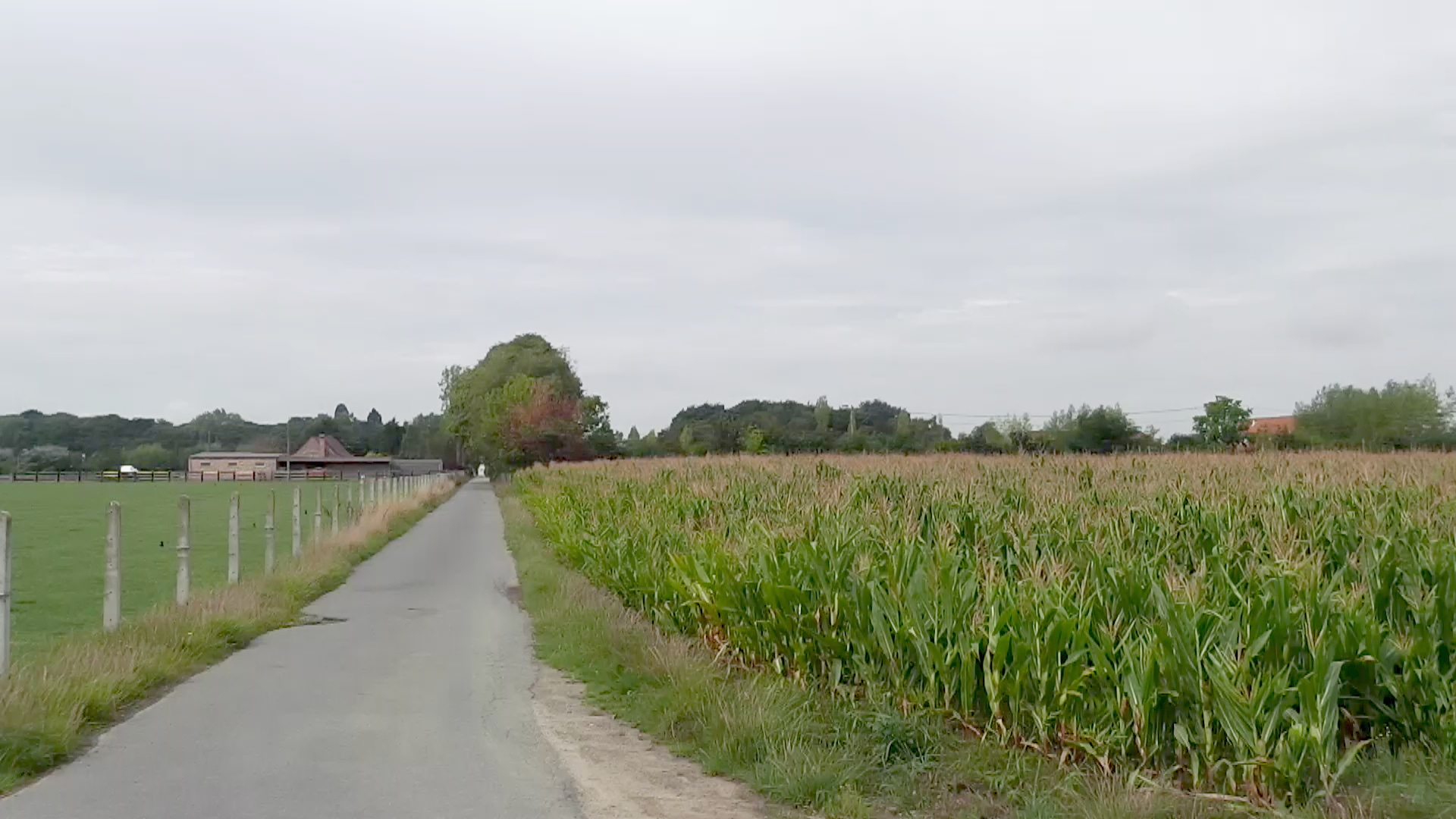 Above: Looking West, back towards route of Jap Avenue trench (Photo 3) 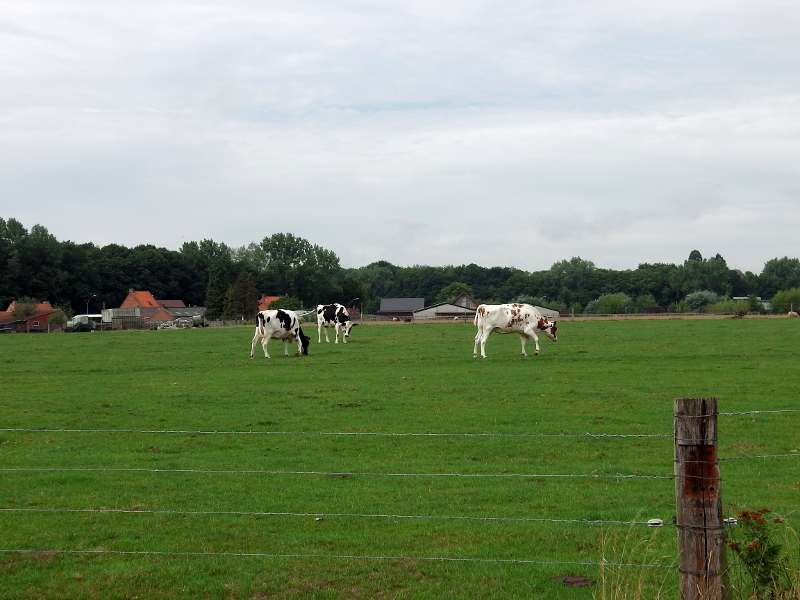 Above: Looking SE, back towards route of Jap Avenue trench, Inverness Copse to the left (Photo 4) 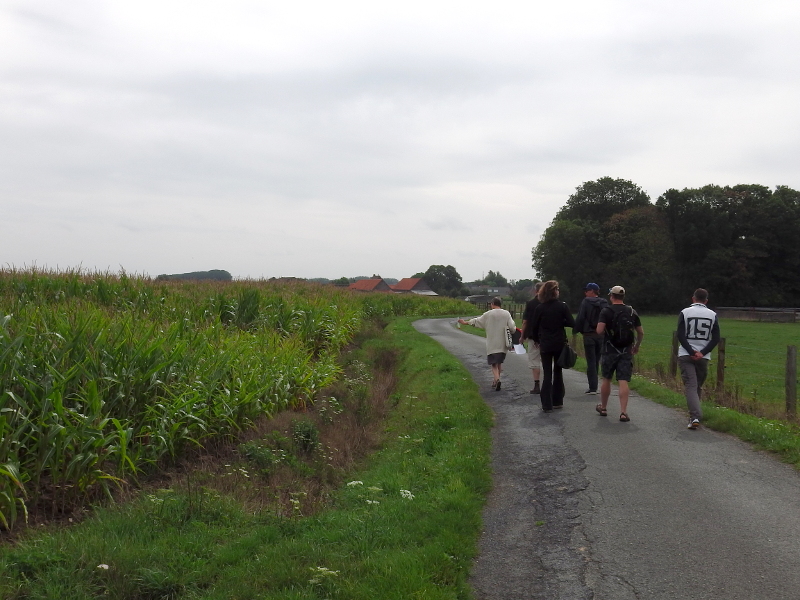 Above: Walking SE towards Menin Road in the area of Fitzclarence Farm (Photo 5) 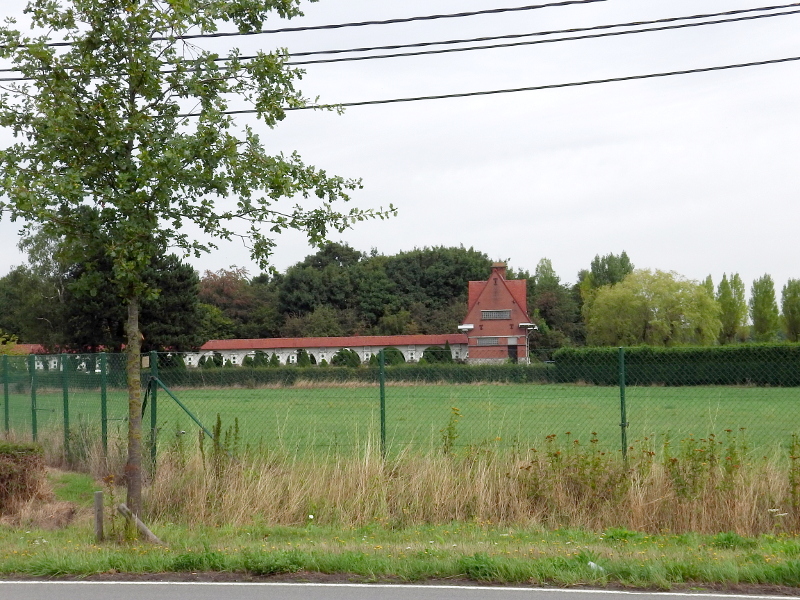 Above: View from corner of Inverness Copse (enemy strong point) towards Reggie's place of death (near hedge?) (Photo 7) 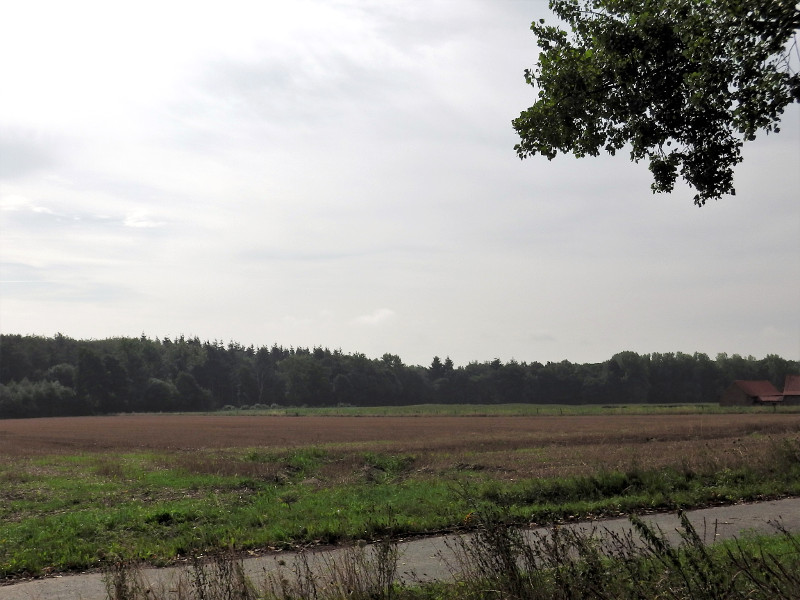 Above: View from Clapham Junction towards Inverness Copse (Photo 8)

Above: This map shows the locations, and direction, from where the above photos were taken (Move the mouse pointer over the arrows to see the photo)

Above: 26 September 1917, View of the countryside near Glencorse Wood and Inverness Copse at the time that a German counter attack was in progress (I have merged a three part panorama.) (https://www.awm.gov.au/collection/C954258) 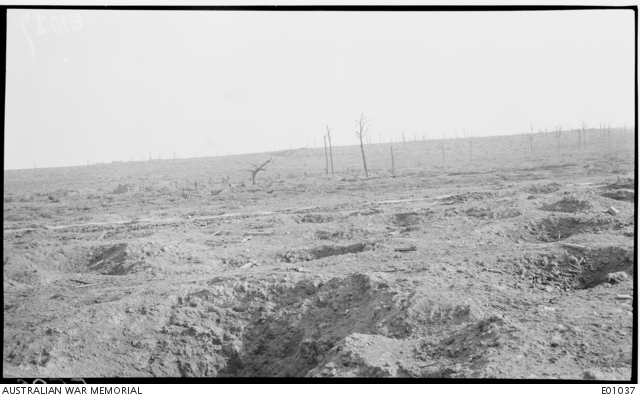 Above: 20 September 1917, A desolate scene on Westhoek Ridge, in the Ypres sector, looking towards Glencorse Wood and Nonne Bosschen. The view includes Polygon Wood on the extreme left and Clapham Junction on the extreme right 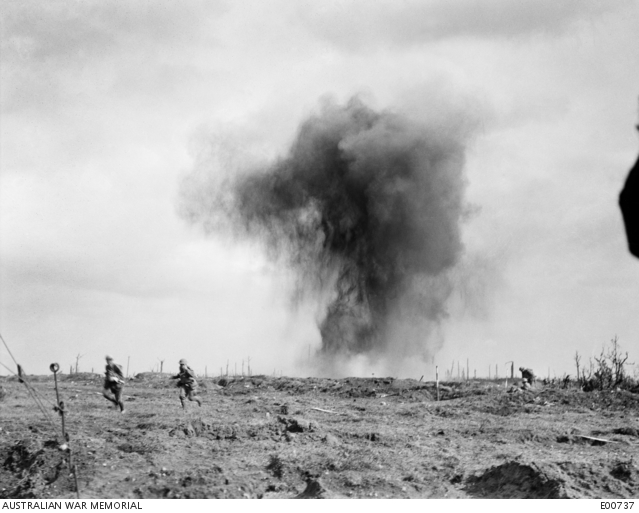 Above: 20 September 1917, Soldiers running to take shelter from a heavy shellburst at Glencorse Wood 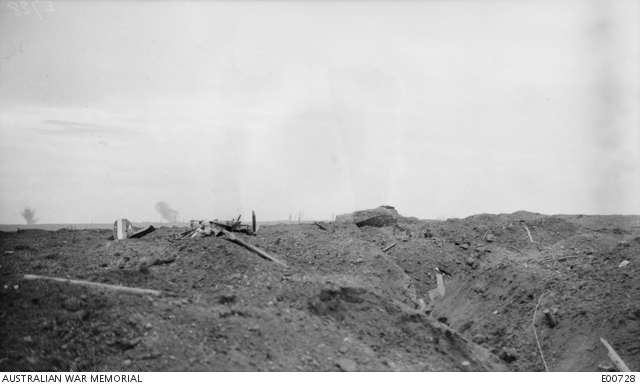 Above: 19 September 1917, A view of no man's land at Westhoek Ridge, showing shells bursting over the German trenches. The photograph is taken looking towards Glencorse Wood and Inverness Copse. (Wreck of an R.E.8 aircraft serial A... (obscured) in the foreground). 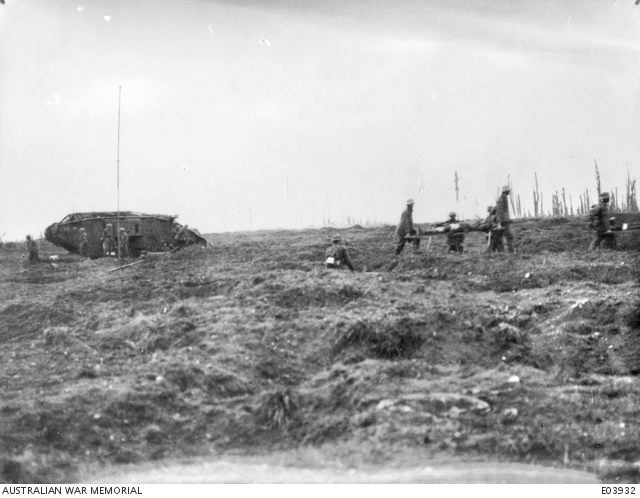 Above: 20 September 1917, A Mark IV female tank at Inverness Copse during the fighting by troops of the 1st and 2nd Australian Divisions. Note the stretcher party, comprised of German prisoners, seen on the right conveying wounded troops. 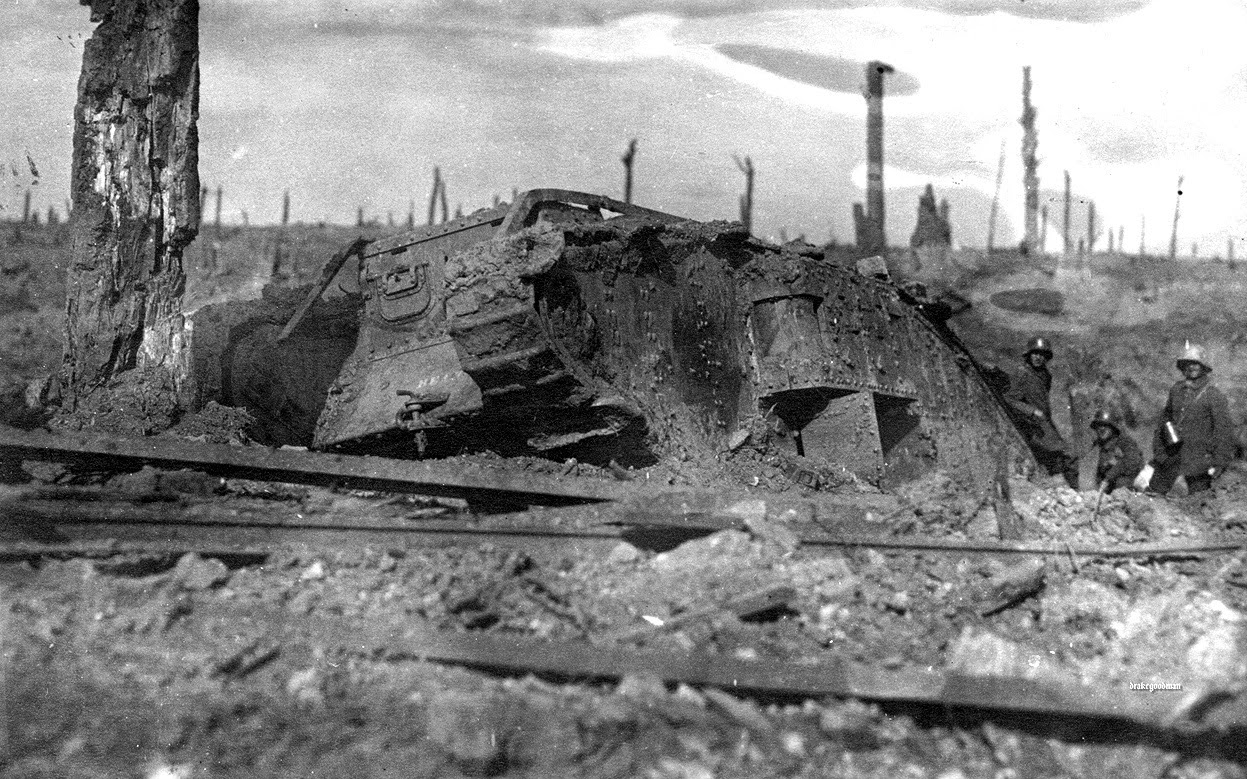 Above: British MkIV "Bear" tank, abandoned after battle near Inverness Copse, on August 22 , 1917. 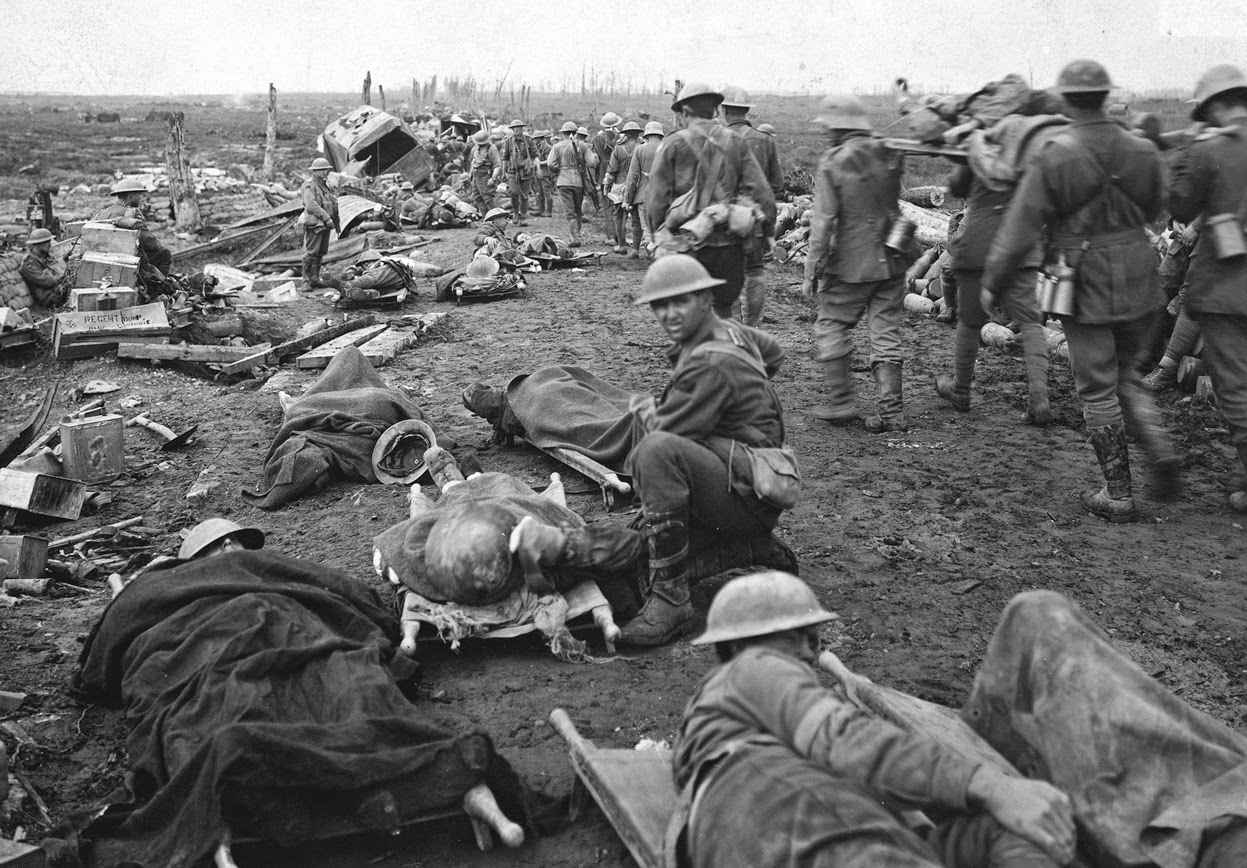 Above: Men wounded in the Ypres battle of September 20th, 1917. Walking along the Menin road, to be taken to the clearing station. German prisoners are seen assisting at stretcher bearing.

The Ceremony at Menin Gate 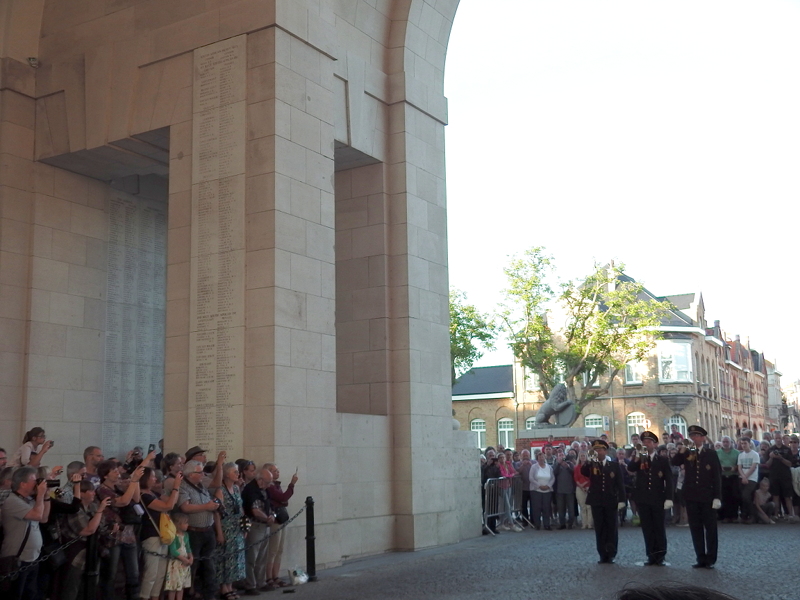 Every day, just before 8 o'clock in the evening, the local police halt the traffic passing through the Menin Gate. For a few brief moments, the modern world is brought to a stop and the Last Post ceremony takes us back in time to the terrible and turbulent years of the Great War, as we pause to remember our dead.

The Menin Gate was chosen as the location for the ceremony because of its special symbolic significance: it was from this spot that countless thousand of soldiers set off for the front, many of them destined never to return. 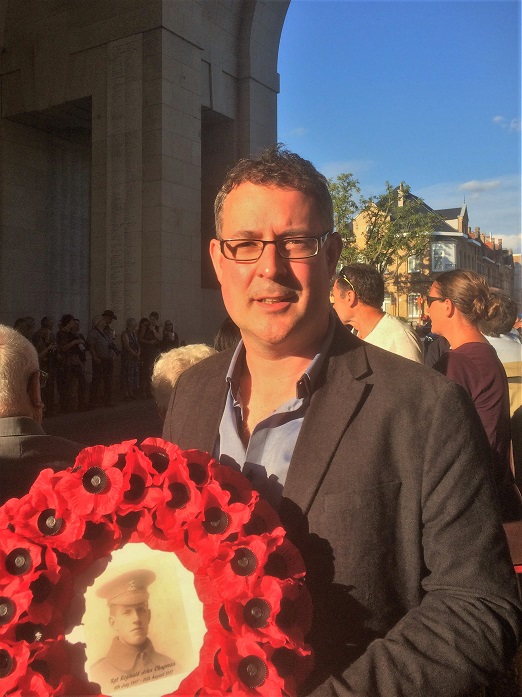 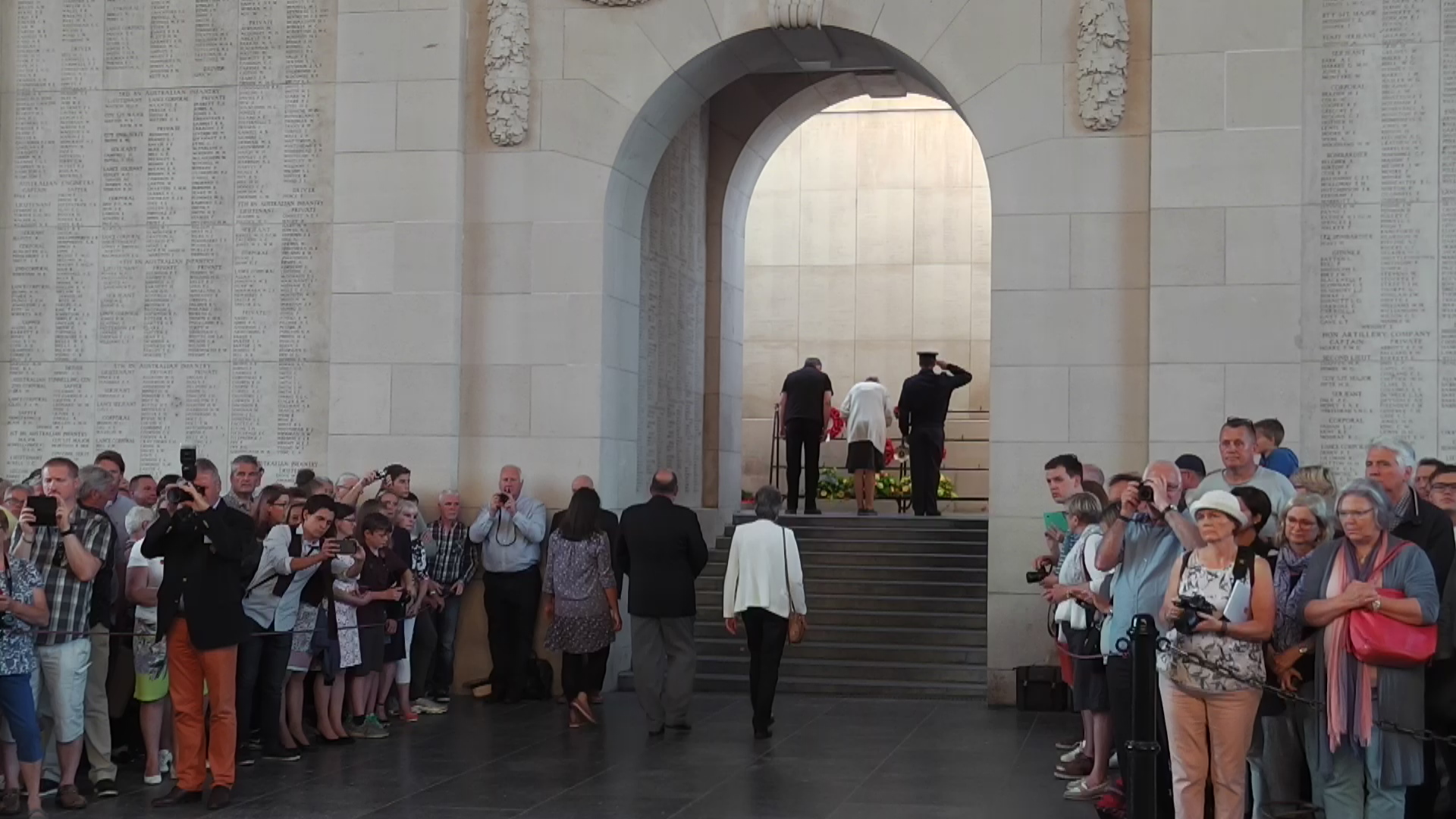 (30/07/2017, two weeks earlier, photos and video from the ceremony commemorating the start of the battle: http://www.lastpost.be/en/photos/2017/centenary-third-battle-of-ieper) 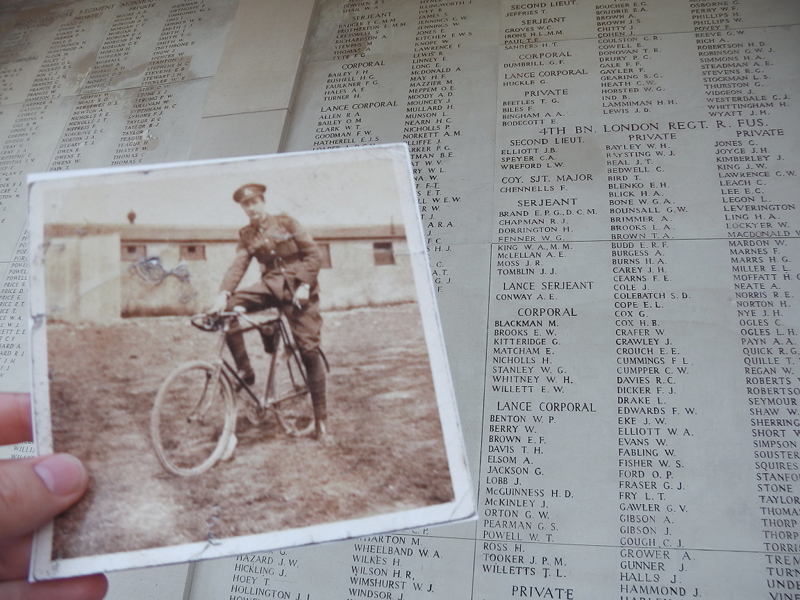 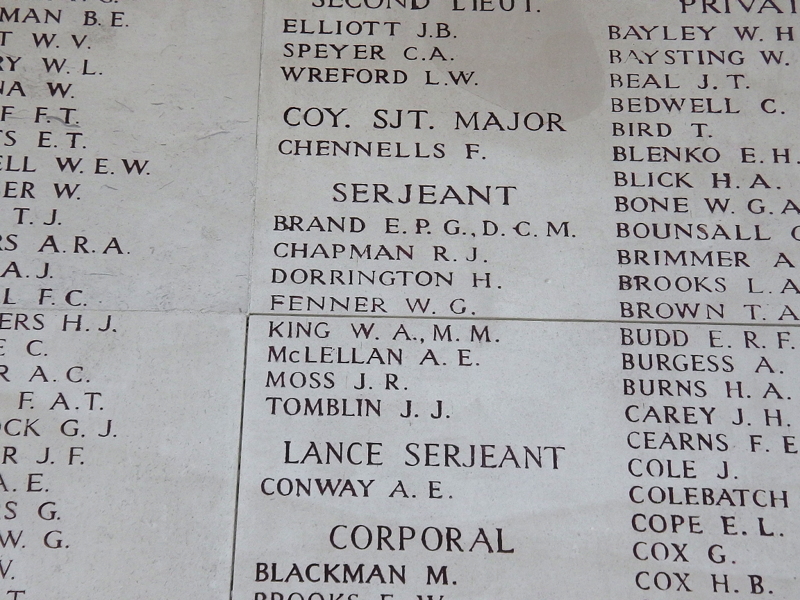 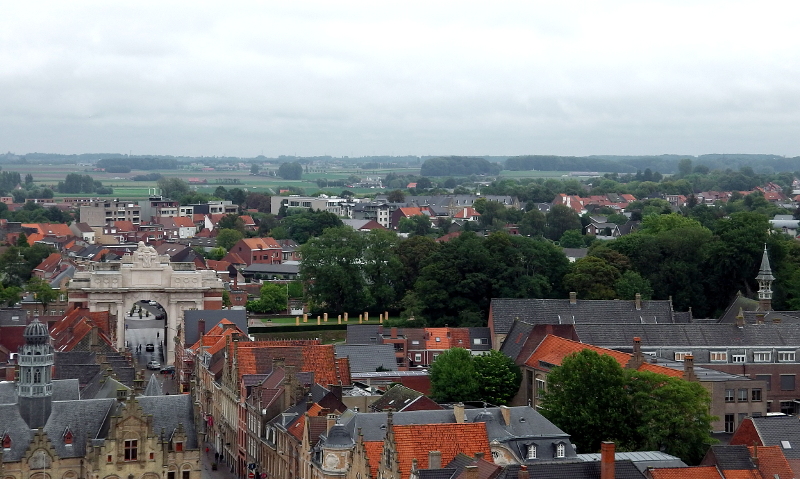 Above: View from the Cloth Hall's tower, looking East. Menin Gate on the left and Invernes Copse on the horizon top right 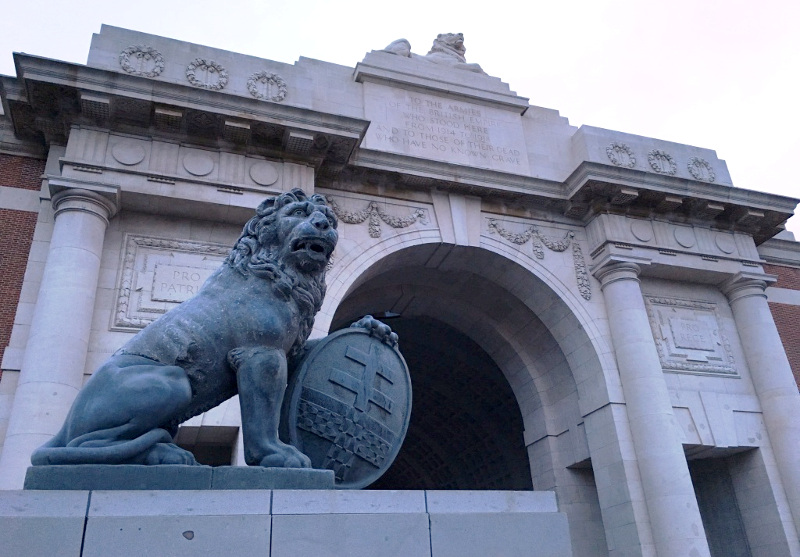 Above: Now back at the Australian War Memorial (Canberra), the Menin Gate lions were returned to Belgium to mark the 100th anniversary of the 1917 battles. 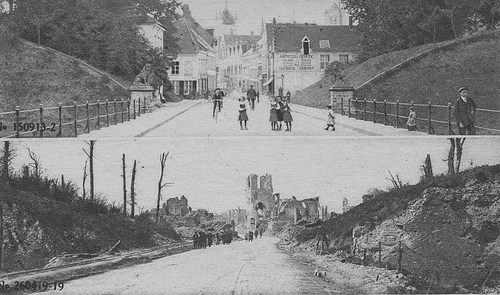 Above: The site of the Menin Gate before (with the lions) and after the first world war

Reggie's great-great niece at her school’s Armistice Day commemorative display, marking one hundred years since the cessation of hostilities on the Western Front of World War I, which took effect at eleven o'clock in the morning—the "eleventh hour of the eleventh day of the eleventh month" of 1918. 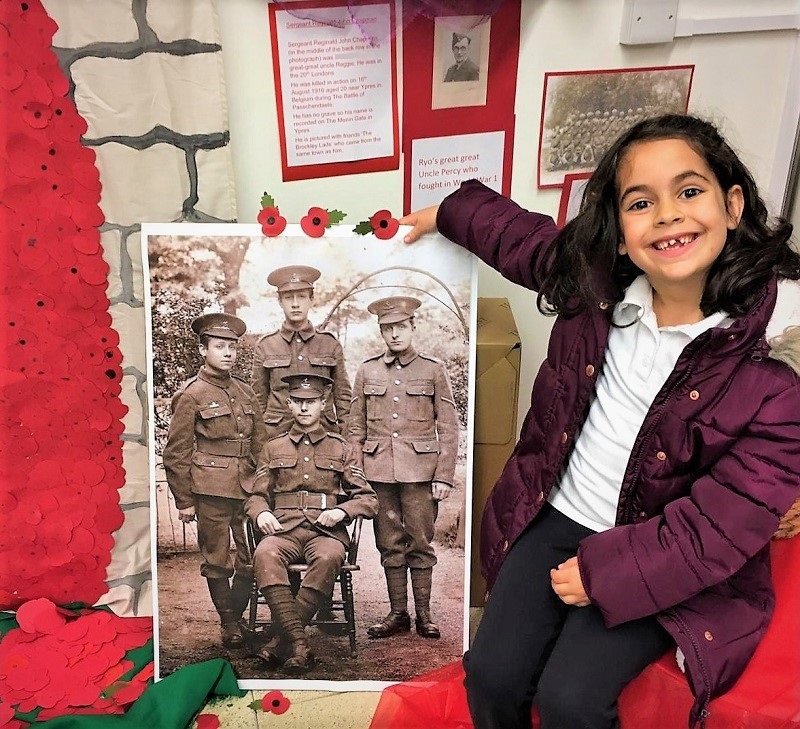 “When you go Home, tell them of us and say,
For your Tomorrow, we gave our Today”

The armistice initially expired after a period of 36 days. A formal peace agreement was only reached when the Treaty of Versailles was signed the following year

The Last Post at the Menin Gate, Amistice Day 2018: